I am beyond proud to say a project that started in August of 2015 has finally hit the streets! We started down this journey with a plan to make some videos to help customers understand, implement and be successful with NSX and I feel we delivered on that vision. 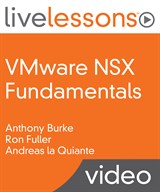 Want to check it out?  Here’s a link - http://www.pearsonitcertification.com/store/vmware-nsx-fundamentals-livelessons-9780134467214

There is also an official blog post about this on VMware.com here:
http://blogs.vmware.com/networkvirtualization/2016/02/introducing-vmware-nsx-fundamentals-livelesson-from-vmware-press.html
For those who have never been involved in a project like this, it’s not a quick flash, bang, boom and you are done. We all spent many hours discussing, creating, critiquing and finally recording over 14 hours of content. This was the first such project for two of the contributors, Anthony Burke and Andreas la Quiante. I think they were surprised by the level of effort that goes on behind the scenes as the Pearson/VMware Press crew make it all look so easy and polished when it is complete. I've known them both for many years and had no doubts they would deliver as they are consummate professionals.

First and foremost, my wife and kids deserve credit for their sacrifice of time both at home and when I was away recording. They put up with my crazy ideas and support me all the time. Thank you all!

Denise, Chris and Pete were instrumental in all of the phases and I can’t thank them enough.  Denise puts up with all of our collective excuses, especially mine and has been our champion since day 1. Chris is the one who has to deal with our typos, messy slides, formatting questions and last minute reviews of content. Pete is the one who has to suffer with listening to us talk and does all of the video recording work. He’s super patient, provides feedback on how to suck less and even has liquid encouragement for us.  Without these and the countless others on the team, this would have never happened. I can’t thank them all enough for putting up with us and believing we could deliver in such an aggressive time frame.

Finally, last but not least Nikhil, Dom, our immediate managers and the entire product team who answered questions and helped with ideas and content – thank you!
While much of the process is a bit boring, I thought I’d share some pictures I took while we were recording in San Francisco the week after Thanksgiving.

Sunrise over San Francisco and a view into the Starlight Lounge where the NSBU VMworld After Party was. 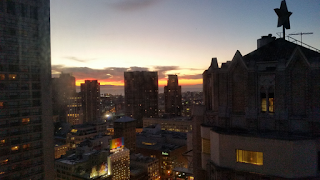 Anthony and Andreas were all smiles the first morning 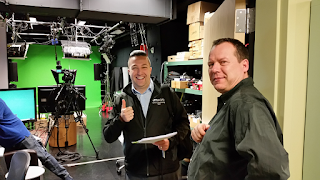 Andreas getting straight to work 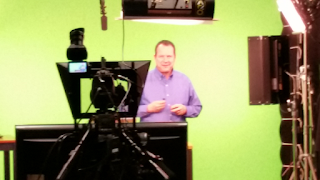 Anthony is all smiles for his shoot 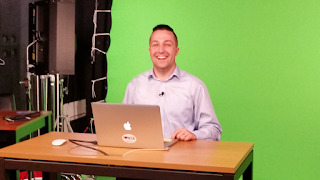 Paperwork for the next big thing 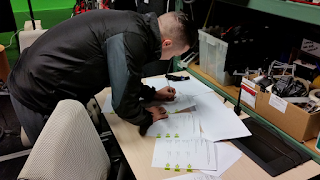 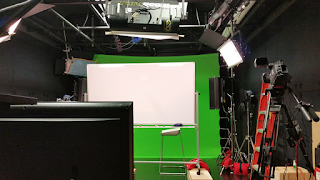 This is what happens when you ride an elevator with Anthony – you’ve been warned! 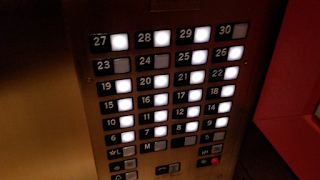 This is near and dear to my heart – not to mention Dave Thomas of Wendy’s fast food fame is from Ohio and Wendy’s corporate HQ is in Columbus! 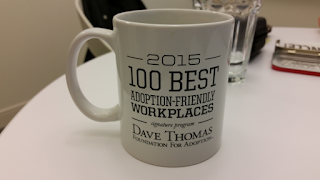 Finally, this is what I bought on the way back to the hotel the last night. I was sick for 3 weeks with whatever bug I caught out there. 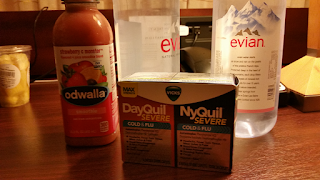 Posted by Ron Fuller at 8:20 AM No comments: 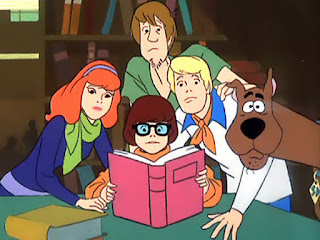 Jinkies, gang!  I just realized I had not published this part of the story, so with egg on my face, here it is.

When we last left off, the table was in the basement and I was in the process of staining it. This is the first thing I have stained from scratch and let’s say a lot of lessons learned.  First, I bought Minwax pre-stain, stain and polyurethane with all of the other supplies. Being a guy, I just grabbed what I thought sounded good and didn’t pay attention to detail. I should have known better, but like I said, I’m a guy. As it turns out the details are *very* important when it comes to stains and finishing.
Let’s start with the fact that they pre-stain and bought was a good idea for the pine boards I was using. The downside, the stain I bought was water based. The stain I bought was oil based. What’s the old adage?  Something about oil and water not mixing? Yeah….about that.  I realized my goof of course after I slather the boards in the pre-stain. My plan was to let it soak in and dry, then sand it a bit to try and help avoid the inevitable oil and water based products mash up. It was too late to get a water based stain as I was an industrious little beaver and had already started staining the first boards after sanding them when I noticed the stain wasn’t staining as well as I had hoped.  They were coming out a lot lighter than the deep cherry finish I had hoped for.  After some more reading, more sanding and cursing (before my Lenten plan to give up swearing) I decided to suck it up and plow forward. 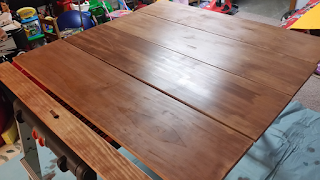 Also, I found that me shaking the cans for a little but doesn’t really mix it as well as you’d think.  I am sure this stuff was poured into the cans during the Paleolithic era and had some serious settling. Unfortunately, I found this during the application of the 2nd coat of stain when all of the sudden the stain was a lot darker – like the color I had hoped for levels of dark.  Crud.  There wasn’t enough stain to go around for a full 2nd coat so I did what I could do, which was the tabletop for the most part so not all was lost. It didn’t look as bad as I had feared once it dried.
The final step was finishing with polyurethane. As it turns out, this was one part I didn’t really botch up and it looked pretty good considering finishing seems to be quite the art more than a science. Not that I am good with either obviously. The smell was bad but after 2 days of pre-stain, stain and now finish, my family was used to it. We were fortunate that the windows could be opened and we had a nice breeze in the basement with a fan I rigged up to hang from a beam drawing air in. 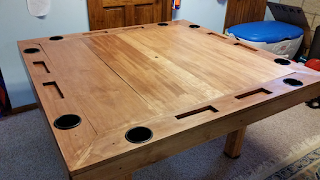 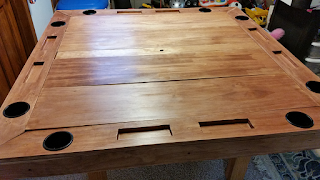 When all is said and done, I am happy with the end result. It’s a little lower than I would have liked, even though the table tap measures exactly the same as a folding table we have – the edges just come down more. It’s not a problem for the kids but the top of my thighs are up against the table. No biggie. After a few weeks of really drying, the tabletop fits nicely and pops in and out easily. The kids have already used it for solitaire, there is a puzzle being put together on the lower part and we’ll be playing some D&D on it soon. All in all, success!
This was a fun, challenging project for me. I learned I better keep my day job and that a career in woodworking isn’t in the cards for me yet. I don’t get the same level of relaxation others say they do, but that’s probably because I am learning so much every time I do something. If nothing else, we’ll have a neat table that’s highly customized and all of us worked on at different points in time.  Would I do it again? I’m not ready to sign up for that just yet, but would consider it.
Posted by Ron Fuller at 2:31 PM No comments: