GORUCK D-Day Tough – Indianapolis, IN – AAR
Here we go again – another GORUCK event and my 3rd Tough. My two oldest kids and I drove over Saturday evening and parked close to the start point. We were slated to start at 10PM so were happy to be in place around 9 so get changed and geared up. This event was something we were looking forward to for multiple reasons. First, GORUCK events are fun so always something to anticipate. Second, this one is focused on D-Day and with 2019 being the 75th anniversary of it, we knew the event would be special. Finally, we were doing an event with Cadres Cleve and Belman, both of whom we’ve done events with in the past (Cleveland Mog Mile Light) and Cleve was also one of the cadres at the Double Heavy in Cleveland. We knew this would be an event worthy of the Tough moniker and boy was it!

We walked over to the start point, which was The Oval at White River State Park in downtown Indianapolis. We were happy to find the other GRTs hanging around and met quite a few familiar faces from previous events. There were a handful of people coming back from the Heavy which was great to see. Doing a HTL (Heavy, Tough and Light) is on my “to-do” list and by being fresh faces for the Tough, we were helping them get to their goal. We had watched some of the coverage from the Heavy and as usual, the cadre brought the work. The cadre rolled in right at 10 and we formed up and did the normal admin phase of roll call, gear check, medical issues, etc. Cadre Cleve was happy to see we “brought the family” to the event. The cadre took turns talking about D-Day and with Cadre Belman being a Ranger, D-Day holds a special meaning for him and in fact he had just returned from a trip to Normandy so his descriptions were very fresh and realistic. Cadre Cleve was quick to point out the role Marines played in D-Day as well which was good to know since you don’t normally hear much about them. It was a true team effort for the biggest military operation ever run. 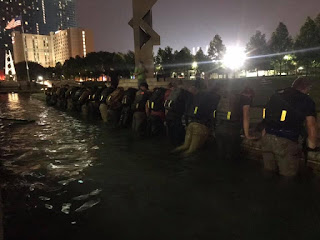 Admin phase done and a quick background and history lesson, we were instructed to get in the water of the nearby canal. Well, that escalated quickly! To be fair, we expected it, but I didn’t think it’d be 10 minutes into the event. That’s why I love these events – so unpredictable! We were told to link arms and then as a team, get underwater for 5 seconds. We all did it and then were told to do it again. Now our rucks were good and soaked as well as the rest of us. We then put our hands on the edge of the canal and did some exercises where we squatted and then used our arms to push up until they were locked. This was challenging with the wet rucks but nothing compared to what our soldiers in the Higgins boats faced when the gate opened. We then did some flutter kicks before getting back in the water and doing a couple of laps running in the waist deep water. We were told to get out and do team lunges with our rucks pressed. Drain holes in my ruck is a note to myself as I was still having running water fall on me when my ruck was overhead. We didn’t do the lunges to the cadre’s satisfaction so we switched out to low crawls. Like, really, really low crawls. If you imagine hitting the beaches in Normandy it helps you get low. We then transitioned to “I’m up; he sees me; I’m down” where you run and when the cadre says “He sees me” you drop to the ground. We did this for the length of the field we were in with multiple ups and downs. One of our team members noticed that they lost the bite valve to their water bladder so cadre had us low crawl around to find it. Fortunately it was located in short order but we had to pay for leaving a threat indicator, signs that you have been in an area and in a real world scenario can be a big deal if the wrong people find it when you are trying to be stealthy. We did some buddy drags and I was unfortunately a casualty. The only saving grace was the wet ground and 2 strong dudes to drag me around. After the drags we gathered around Cadre Belman who shared some more details about D-Day and Normandy. 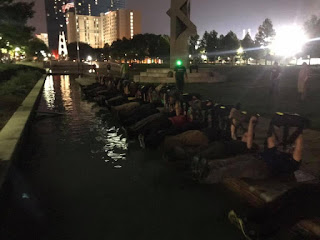 People frequently wonder why I enjoy these events so much. There are many reasons but certainly one that is unique to GORUCK is the access to the Cadres. Their stories and descriptions of events brings so much insight and detail that you just don’t find in anywhere else. After a few minutes, we topped off our water and prepared to move out. We broke down into three groups and our goal was to place a demolition charge on a pillbox ahead. We were given options as to how we wanted to move as a team and we had fun going back and forth with the other teams.  Once we finished this, we needed to move some serious distance so moved out with our Higgins Boat, coupons of sandbags and water. 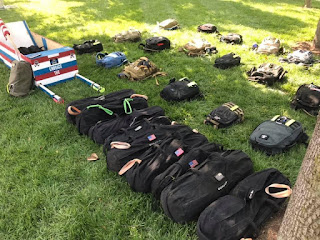 We ground our way for a few miles up the White River trail and came close to where we did the Veteran’s Day event service projects with Cadres Shredder and DS but continued past them. It was neat to see the riverfront we cleared was still open and looked nice. We finally made it to Taggart Riverside Park and we headed towards the park building to look for a working water spigot as many were black on water and we had drained the water we were carrying. Unfortunately the doors were locked and no spigots were working. We moved a bit further north to a restroom that was open and we topped off water there. We had missed our time hack from Cadre Belman and when Cadre Cleve came on we talked about paying our penalty. After some calories and water we circled up in the field and did some PT including the newly monikered Brickyard Manmakers, mountain climbers and more. A quick note on the Brickyard Manmakers – they started here in Indianapolis, home of the Indianapolis 500, and for those that don’t know, the Indianapolis Motor Speedway is called the Brickyard; thus the name. Even when he has you grinding your guts out, Cleve makes it fun and we saw the start of the morning while dropping with sweat, eating grass and bugs and smiling. That’s GORUCK for you.

We caught our breath, topped off water and geared up to move out. We rucked through the neighborhood as the city woke up and had a pretty good pattern of rotating coupons and making time. Cadre Cleve gave us a time hack and we worked like crazy to make it for fear of more Brickyard Manmakers. We were covering miles and making good time as it warmed up with the sun rising higher. We found an open spigot at a church and topped off water for the last time before our final push to endex. We made our way back towards the nice canal area and stopped at the USS Indianapolis memorial and took some pictures. After a brief stop, we moved out and made our way to the park where we started but we were not done yet. One of GORUCK’s Cadre, Cadre Rooney passed away from pancreatic cancer. During his fight with cancer, the Rooney workout of the day (WOD) was created so we did a round of it, +1 for the Ranger in the Sky. It was a fitting end to a great event. 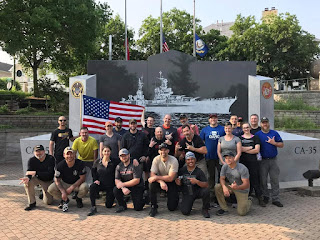 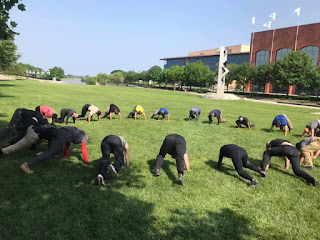 We formed up, were patched and took plenty of pictures, said our goodbyes to our Team Ninja friends and headed towards the car for the drive home.  We would have loved to do the Light but alas, life calls and we needed to get home. As always, GORUCK events don’t disappoint and we really learned a lot about D-Day, Normandy and being able to share this with my two oldest kids was awesome. We covered almost 13 miles in a little over 12 hours and countless smiles. 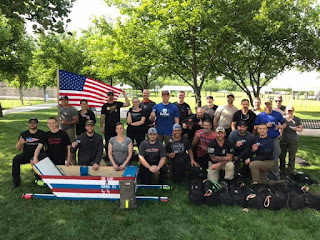 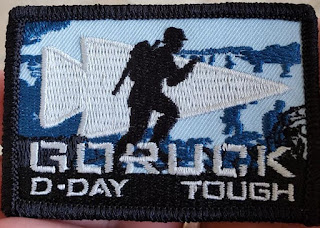 Posted by Ron Fuller at 6:40 AM No comments: