We originally signed up for both the Tough and the Light for the Battle of Ramadi, but as the date drew closer, we received an email from GORUCK HQ that the Tough had been cancelled. Unfortunately there were not enough people signed up to run the event, which made me worry about the Light as well. Would there be enough to justify sending a cadre to Columbus for just a Light? The good news, there apparently was, otherwise this would be a very short AAR.


My oldest son and oldest daughter loaded our gear into the car and we made the trip to Scioto Audubon Metro Park. Even with this not being our first event, it was our first with Cadre Igor so there was a new variable and apprehension. We’ve seen a few other AARs and comments on the Tough page about him but beyond being a Ranger and smiling a lot, there wasn’t much to go on. Was he smiling because of the funishment he doled out or because he was having a great time with the class? We’d know soon enough.


We arrived early and enjoyed catching up with some friends from Southern Ohio Rucking and Endurance (SORE) as well as a former colleague who was there for his first event. I’ve written about it before but the community within GORUCK is phenomenal and having friendly faces around at an event is always an added bonus. Cadre Igor was sitting at the start point in his rental car with a large Ranger tab sitting next to him. We finished with final gear prep and restroom stops in time to line up in formation and get the fun started. We worked through the usual admin phase and it wasn’t long before we started some standard PT. Pushups, sit ups and the like. Cadre Igor was smiling the whole time and shared more details about his background while we warmed up.


Scioto Audubon has a nice obstacle course and after a few other GORUCK events where we didn’t use it, Cadre Igor had us put it to good use. We broke down into two teams and then carried some sandbags on litters through the course as a team. It started to sprinkle a little but fortunately didn’t last long. We worked our way across an A-Frame cargo net, over and under logs, over a wall, a jumble of logs and finally through some tire flipping. We did pretty well working together, communicating and getting it done and we were all plenty warmed up and dirty. 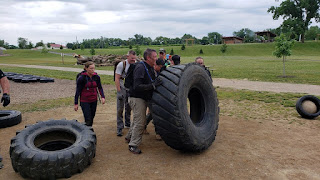 We shifted into rucking mode as Cadre Igor gave us a destination outside of the park, just up the river trail. We grabbed our coupons, flags, Ranger tab, litters and moved out. Our destination was Bicentennial Park so we headed north along the paved Scioto Trail. This weekend was Pride Weekend and Columbus has a pretty big celebration. As we rucked closer to the destination it became clear Bicentennial Park wasn’t going to work as it was jammed with people. What did Cadre Igor have us do? We rucked across the Rich St bridge, right through the crowds and eventually down to the riverfront where we navigated our way under the bridge through the concrete trusses. We drew plenty of interesting looks and comments from the crowds but nobody was rude or confrontational.

Our class all settled in under the bridge for a bit of history of the Middle East which is always helpful to provide context about the events that unfolded, motivations and people involved.  Cadre Igor clearly has a lot of depth and information in this area and had a great way of sharing it. Before we moved out, he asked a few trivia questions about the era we were discussing. We did well enough to lose a sandbag but not well enough to lose multiple. There are large concrete steps used for seats during events and we were challenged with litter carries as teams up and down the stairs. This will get your heart pumping and after 10 rounds we all were huffing. 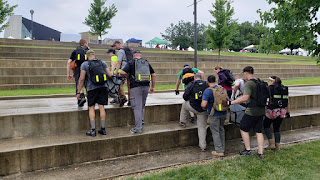 We got a quick drink of water and then moved north through the crowds and behind a stage that had been setup for the weekend. While we were passing through, there were drag queens dancing and one had a wardrobe malfunction (wig flew off) much to the crowd’s delight. We worked our way through the crowd and eventually to the new Veteran’s Memorial on Broad Street.


We took the path up the spiral walkway to the roof garden/area where we settled in for some more learning while hydrating. It wasn’t long before a security guard came up and told us that the museum was closing soon and that we’d have to get off of the roof. It never fails, when we’ve come here we don’t get to stay long. We’ll have to come back and see it without an event happening some day. Haha. 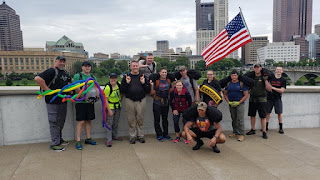 We collected our gear and moved down the spiral, across the Broad St bridge and long the east side of the Scioto Trail. We made our way north and turned towards the Huntington ball park and then wove our way to a parking garage. Cadre Igor taught us how a unit clears stairwells and we practiced doing that up and down with finger guns and an air RPG. LOL. 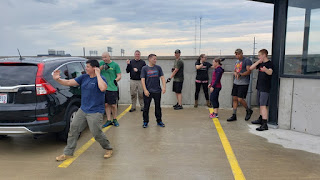 We were having fun, learning and getting some exercise in all at the same time. After we secured the garage we rucked back to the main road and continued north to Goodale Park. Another bio break and some water before we stated some more trivia and PT.

Earlier in the event Cadre Igor had given us white strips of cloth and admonished us to not lose them. I had forgotten about them but now was the time to put them to use. We broke down into two teams and used the cloths to tie our legs together. Think of it like a giant 3 legged race but with a whole lot more people. We raced the other team and while it was close, we won. We really were doing pretty good with communication and team work. Cadre Igor also asked a trivia question from “Lord of the Rings” and I like to think I’m a pretty big Tolkien nerd, along with a few others on the team, we were all wrong. Bummer, no sandbag dumping here.


We moved south along High Street where a big gaming convention, Origins, was taking place. Downtown Columbus is hopping this weekend! We worked our way through the crowds, swapping coupons and making decent time south. At Nationwide and High we were offered more trivia and this time, we nailed it so were able to lose a sandbag. Woot! We packed up and headed south again and turned west on Broad St and then south on Marconi. We stopped at a gas station for endex supplies and picked up the river trail.


Cadre Igor had us stop along the route and we did some pushups in sequence as a team. We knocked out 244 in honor of the US Army’s birthday and when the US flag was created. 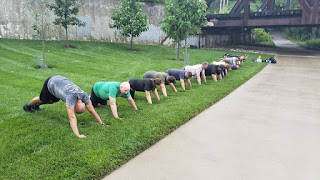 We also answered more trivia and lost some more weight. We were headed towards Scioto Audubon again and in the home stretch. We all had a good laugh about who was taking the sandbag we were using to carry the empty sandbags and fillers since it was the lightest coupon around. 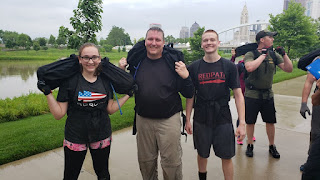 We made our way back to Scioto Audubon and dumped the remaining sandbags back at the volleyball pits and then rucked back to the start point, where we lined up and were patched. Class 3137 was endexed.


Cadre Igor broke out some beer and Gatorade (for my kids) and we all enjoyed talking some more and having a good time. Unfortunately, the metro park police showed up and confiscated unopened beers and had us dump the open ones. They made a comment about how “You GORUCK people ruin things and take advantage of the park” which was weird. Apparently they have a no alcohol policy and previous events have not followed it as well. LOL. We all said our goodbyes, thanked Cadre Igor and hit the road. Overall it was a great event and we had a good time. We rucked 9 miles over the 6ish hours it ran and I look forward to doing more events with Cadre Igor. 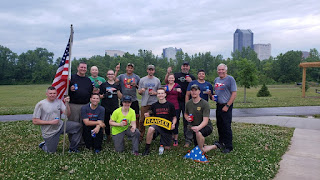 Posted by Ron Fuller at 9:12 PM No comments: