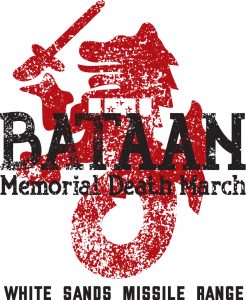 Dear God - what is that noise at 3:15AM? Oh yeah, it’s one of the three alarms we set to make sure we got up on time. Today is the day, it’s finally here - the Bataan Memorial Death March marathon. My oldest son and daughter and I signed up for it last year and here we are in Las Cruces, NM getting ready to roll out of the hotel at 3:45. All of our gear was packed and set by the door last night when we were not suffering from morning brain so it was easy to get dressed, grab our gear and go.

I grabbed a coffee from the hotel’s Bataan marcher’s spread and we were in the car. Breakfast was a bagel and a cinnamon coffee cake muffin that was bought the night before. This was the final carb load before the marathon. We hit US-70 and while westbound traffic was non-existent, there was a steady flow of vehicles moving east towards White Sands Missile Range (WSMR) where the March was being hosted. As we started down from the pass between Las Cruces and the base, we could see the line of tail lights at the security gate. It was cool to see from a distance and we all hoped it would go fast enough so we wouldn’t miss the start. The web site had recommended we be at the gate no later than 4:30AM and we got in line at 4:22 so we were on track. It took about 20 minutes for us to get on base and to the parking area.  We were pretty early so sat in the car for a while watching people stream in. There were a lot of people in fatigues and of all ages. We could tell this event would be a special one for sure.


After a while we made our way to the start line which was quite a haul away from where we parked. Seems the theme of the day will be distance. It was still dark and we were close to the back of the pack with the civilian ruckers. The start line was in the distance and lit up during the opening ceremony. Sadly, the audio wasn’t very good so we didn’t catch much of what was being said and who all of the dignitaries present were. They had a large video screen so we could see what was happening but couldn’t understand their words. After the pomp and circumstance, the actual event started and we were released in waves with runners going first, then military ruckers, followed by us civilian ruckers. My son made his way to the front of our wave as he was going to go for time while I was focused on finishing. Since my daughter is a minor, she was required to stay with me as we were on an active military base. She had a ruck with water and supplies but was not part of the Heavy division like my son and I. The Heavy division requires you complete the march with 35lbs of dry weight in your ruck, which will be weighed at the finish. I had a 30lb GORUCK plate and 5lbs of rice we had picked up the day before in addition to my other supplies like water, raingear, etc. The race organizers recommend dry foods as they offer a collection at the finish and it seems that’s a very popular way to go for many people based on all of the food we saw being loaded into trucks. That said, we finally started to the sound of a cannon being shot off and our day really began. 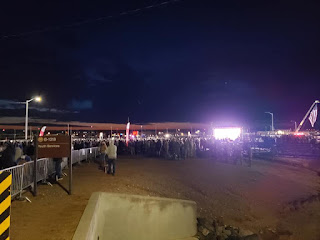 The first part of the route took us through a portion of the base on paved roads. There were pockets of people cheering us on and even a guy with a ukulele serenading us and posing for pictures. I wish I had taken one but had just put my phone away and didn’t want to stop moving. The sun was rising as we started and it was a beautiful morning. 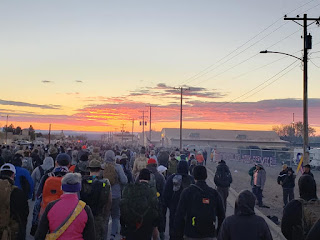 About 3 miles in we transitioned from pavement to a dirt road which was a welcome change. Pounding pavement takes quite a toll, especially when you are under extra weight. Everyone was smiles and having a good time in the early going as we approached the first aid station. The line for the portable toilets was long so I got some oranges from the actual aid station while my daughter waited in line. 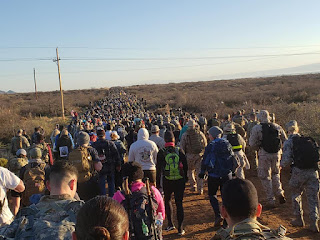 They gave us whole oranges which was nice - or so we thought - and we continued on. The sun was coming up so we put on sunscreen as we made our way down a long, straight dirt road with thousands of other marchers. We started peeling the oranges and they were good with only a few seeds. The downside was now our hands were all sticky and we really didn’t have a way to wash them off. Between the sunscreen and oranges my hands were pretty gross.


Our next big aid station came at mile 8/20. This was a transition from the dirt back onto pavement. They had more fruit to pass out, portable toilets, volunteers giving out sunscreen and plenty of water and Gatoraid. The sun was fully up but it wasn’t terribly hot. We had been making it a point to drink at every water stop and aid station as the high desert can be unforgiving and I knew dehydration would make a tough march, even harder. Drink, drink, drink! While coming into the aid station we saw Joe DeSena, the CEO of Spartan Race, along with the rest of the Spartan Up podcast crew. I talked with Sefra for a bit but they were getting ready to move out while we were just getting there and resupplied. It was cool to see them and I’ll have to look for the podcast of the event when it is published. Quick update - the podcast is here. 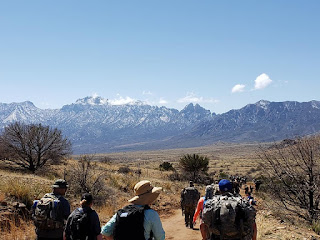 The next section of the course is a slow slog uphill for a few miles. There is no shade and you are back to pounding pavement. We really slowed down on this part of the march and stopped once to do some footcare for my daughter and a hot spot she was getting. At the end of the pavement a local Boy Scout troop was selling pizza, burgers, fries, etc. as a fundraiser but neither of us were hungry and we just wanted to push on. The view was nice as you could see out over the basin where the missile range is and even the White Sands National Monument in the distance glimmering. We transitioned back to dirt roads as we wound our way around Mineral Hill. The views from the backside of route showed the base, and eventual finish line, in the distance. We stopped at every water station and hydrated and drank electrolytes.

At mile 18 we rejoined the road we had come up earlier and ran into the SpartanUp podcast crew again. They were all kind enough to take pictures with us and we enjoyed a brief chat with Joe, Sefra and Tim Nye. 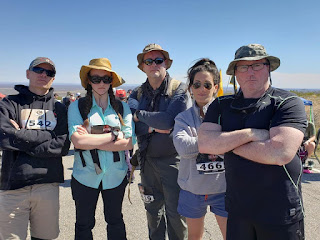 They took off and we refilled our water for the downhill journey. Most people think uphill is always the worst part of an event and while yes, it is challenging for sure, the downhill is the part I dread the most as the pounding my knees take is brutal. We made our way down on the pavement and it wasn’t took long before we were at the mile 8/20 aid station. From here, the course heads west and back on dirt and sand roads. This section is infamous for its “sand pits” of ankle deep sand and we heard it’s where many marchers finish their day and take a DNF. It had rained earlier in the week and even snowed a bit the day before the march so the sand was thankfully pretty compact. We wound our way through the course while staying in contact with my son who was finished and chilling at the finish.

My pace slowed quite a bit as the distance, heat and weigh bore down on me but we continued on. We stopped for footcare and hydration at the last aid station and while there were motivated to get up and go when we overheard the medics talking about how many people they had pulled from the course due to exhaustion, dehydration and blisters. This aid station is at mile 25 so these poor souls were dropping and being pulled 1.2 miles from the finish!  We made our way back to the base and finished strong. My son was waiting for us and it was fun to share stories of the day while getting our medal, ruck weighing and dropping off my rice. My rucks total weight was 45.94lbs - no wonder I was slowing down!  We sat around for a bit and decided our car wasn’t going to come to us and that we needed to start making our way there. Side note, the finish is further away from parking than the start line so we had at least one more mile to go before the car. As we were walking a man with a van asked us if we needed a ride and we gladly hopped in. He and his buddies had just finished and he drew the short straw to go get the car. He gave us curb to car service and I was very grateful to him saving us from that final trudge. We hopped in the car and said our goodbyes to the White Sands Missile Range.

It was a heck of an event and I am thrilled to have been able to do it with my two oldest kids. It was my first official marathon finish and was not impressive from a time perspective at 11:05. It made for a long, long day and was a good test of grit and perseverance. We had perfect weather starting in the upper 30s and finishing in the mid 60s. I am not sure if we will ever make the trip out here to do this again but if we do I’ll have a better idea of what to expect. 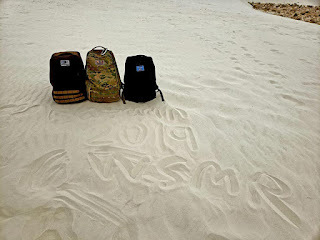 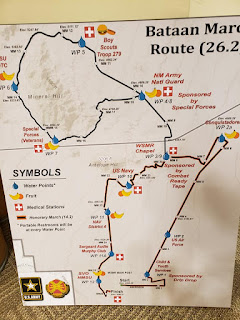 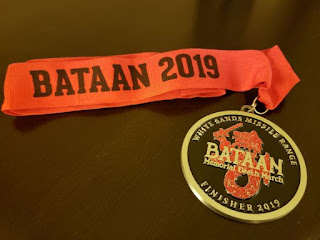