First 48 hours with a Surface Pro 3

For those of you who follow me on Twitter, I've been asking about feedback on the Microsoft Surface Pro 3. Most feedback has been exactly what I expected from the perspective of "Get a MBp/Air/iPad/other Apple device" to "It has Windows so expect the usual issues" and one "Love it."   I'm not much of a follower and sort of do my own thing most of the time but it's always good to get a pulse and make sure the thing isn't a total POS before I buy it.  As I read reviews I felt pretty comfortable that it'd be a sound investment.  I thought I'd share my first 48 hours with the Surface Pro 3.

There are many models of Surface Pro 3 and I chose the middle of the road model with an i5 CPU with 4GB of RAM and 128GB SSD drive.  I'm planning to use this mostly for email, social media, general tinkering around and maybe some video recording if it's up to the task.

My first impression when I opened the box was that the tablet was bigger than I expected and a bit heavier, too.  I think The hype around it being a tablet that can replace your PC had me in a tablet weight/size mindset. After using it for a short time, it seems like I'll use, carry and treat it more like a laptop - meaning it'll be on a desk with the nice built-in kickstand or on my lap.  I don't see many gyro based games like Temple Run in my future with this.  :)

I also bought the keyboard which sticks to the tablet via magnets amazingly well and was a key decision point for me.  The docking station is nice too, though initial docking was a bit kludgier than I expected until I learned it slides apart to seat the tablet.  Probably was in the book that I promptly discarded. 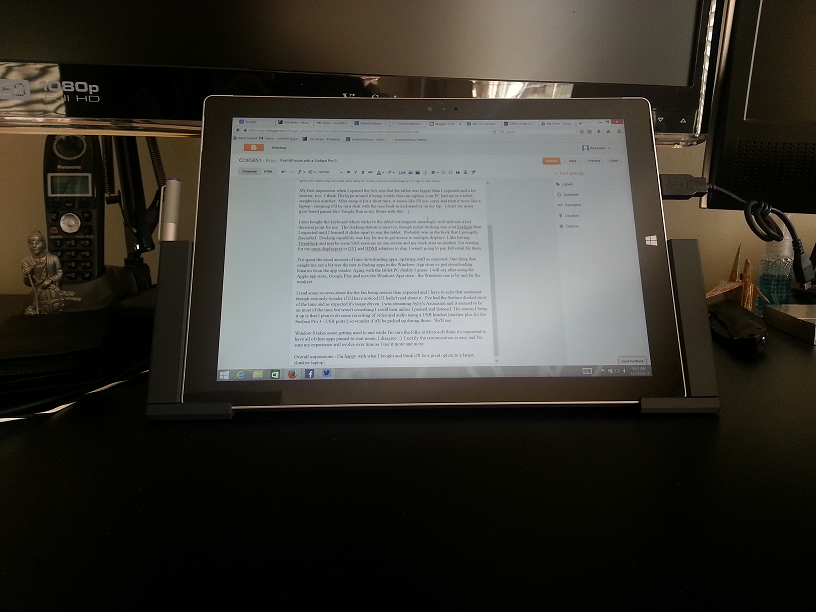 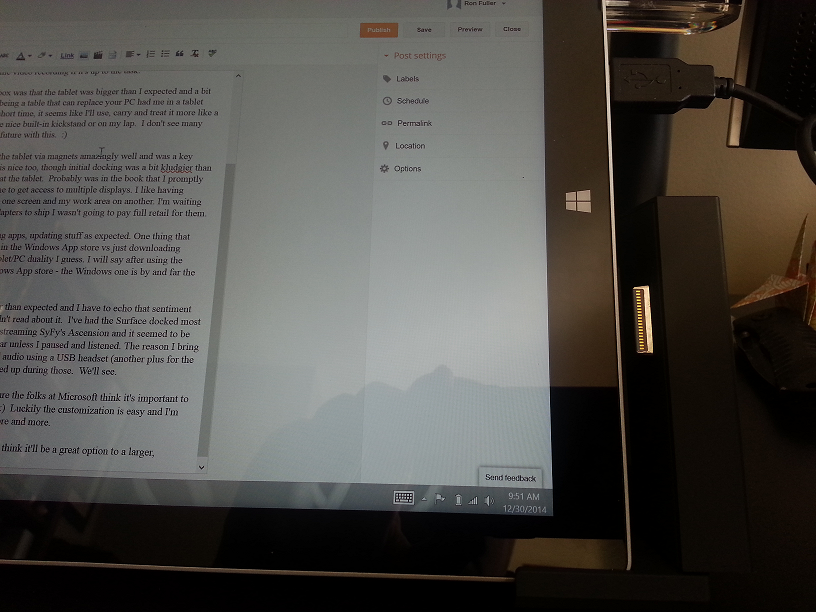 Docking capability was key for me to get access to multiple displays. I like having Tweetdeck and maybe some SSH sessions on one screen and my work area on another. I'm waiting for my mini-displayport to DVI and HDMI adapters to ship I wasn't going to pay full retail for them.

I read some reviews about the the fan being noisier than expected and I have to echo that sentiment though seriously wonder if I'd have noticed if I hadn't read about it.  I've had the Surface docked most of the time and as expected it's usage driven. I was streaming SyFy's Ascension and it seemed to be on most of the time but wasn't something I could hear unless I paused and listened. The reason I bring it up is that I plan to do some recording of video and audio using a USB headset (another plus for the Surface Pro 3 - USB ports!) so wonder if it'll be picked up during those.  We'll see.

Window 8 takes some getting used to and while I'm sure the folks at Microsoft think it's important to have all of their apps pinned to start menu, I disagree. :)  Luckily the customization is easy and I'm sure my experience will evolve over time as I use it more and more.

Overall impressions - I'm happy with what I bought and think it'll be a great option to a larger, clunkier laptop.
Posted by Ron Fuller at 9:59 AM