I am excited about the newest addition to the home lab which is an Intel NUC. Specifically I have a NUC6 with an i3 processor, 32GB of RAM and a 128GB SSD. I've been looking for a smaller footprint for the lab for some time and the NUC kept rising to the top of the list. I looked around at other options and the NUC just seemed the simplest way to go.  I had originally hoped for a solution to get past the 32GB RAM limitation but after pricing 64GB kits, I decided 32GB would do the trick.

My current lab is 2 Dell C1100 (CS-24TY) servers I bought on eBay last year. These servers have 72GB of RAM and boot from ESXi on a USB stick with no local disk. They've done the job well but are power hungry. I knew they'd suck the watts down but didn't realize how much until I connected a Kill-a-watt meter to the plug for the UPS and saw I hovered around 480w between the two servers and a Cisco 4948 switch. While power isn't super expensive where I live, it adds up and I had noticed and increase in our power bill. Thus, the drive for the NUC - not to mention the benefit of having a local SSD.

I ordered the NUC from Amazon and it was delivered and I finally had some free time to work on it Sunday. The box is heavier than I expected but comfortably so, not like a lead weight.  The build was easy after removing 4 captive screws from the base and popping in the RAM and SSD.

Here's what I ordered on Amazon 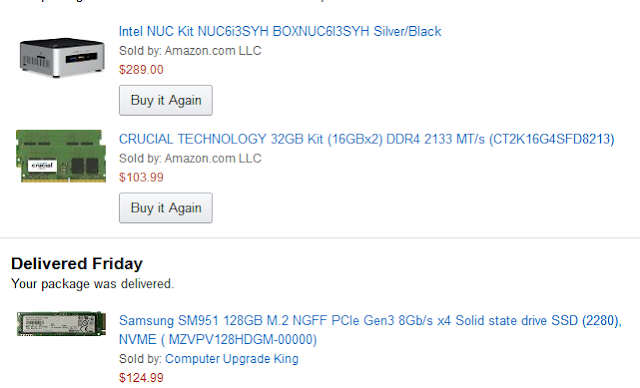 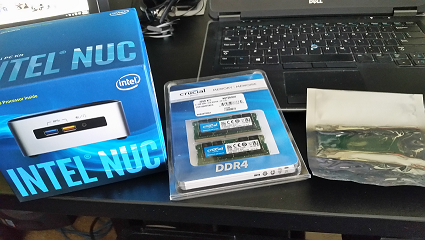 Once I popped the case open. 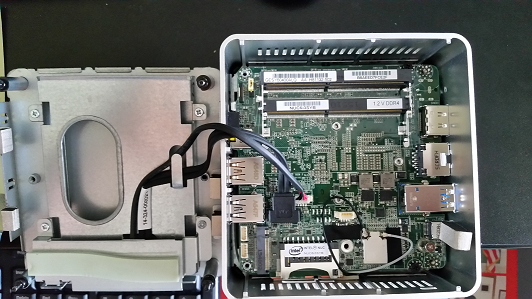 I used Rufus to create a bootable USB with ESXi and connected the NUC to one of my monitors.  I turned on the NUC and the only light was a blue LED on the "front" of the unit - it's a square so front is relative based on the stamp on the baseplate. Nothing on my monitor at all.  I made sure the connections were secure, power cycled the unit and started to wonder if I had a bad box. I was using a DisplayPort adapter to a VGA output but only saw "No signal" on the monitor. The NUC has a HDMI output but I don't have HDMI on my monitors.  I do have DVI so figured I'd give it a try and was rewarded with seeing my NUC boot.  Not sure why this was the case but I was eager to get started so didn't dig into it further.

My first attempt at installing ESXi was with 6.0 Update 1 and it didn't detect the NIC.  I read other blog posts about adding the driver but figured I would give ESXi 6.0 Update 2 a go. When it booted it found the NIC and we were up and grooving.

After ESXi was installed I decided to flash the BIOS to the current revision. It's been a while since I have spent much time in a BIOS (AMI anyone?) and was amazed that the Visual BIOS supports network connectivity, mouse and not nearly as obtuse as I remember! I downloaded the newest BIOS from Intel's site (0044 revision) and applied the update though I used the recovery method and not the GUI (old habits die hard). Easy as can be. 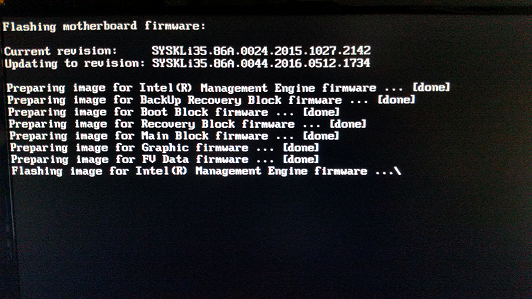 Now it was time to turn this thing up and really get cooking.  I moved the unit to the basement with the rest of the lab equipment because, well, what could go wrong? I had the right software, verified network connectivity and was all set.  Famous last words.