We wake up to a beautiful July morning in Athens and get ready for the day. Unfortunately this is a quick adventure for us and we're packing our bags not to move to the next hotel but to go home after we finish our caching.  The breakfast at the hotel was very nice, especially for a Hampton Inn and I'm sure they regret letting our horde hit them hard.  :)

Today's plan will take us further east and a bit north before we'll head back to Central Ohio. Again, we've laid out our path to maximize counties + caches.  Our first cache is not too far away and everyone is in good spirits.  As we approach the cache we see it is near what looks like a small Ohio oil well and as luck would have it, there is a truck sitting there with someone in it. Here's a picture of the type of well I am talking about (not a big Texas or Oklahoma one). 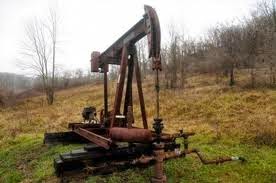 We drive by, turn around and park along the road to see if he's just there for a quick check of things on a Sunday morning or not.  We wait a few minutes, check our phone (no signal....grrr) and discuss what to do.  We drive by again and it looks like the guy is just sitting there with no intent to leave so we scrub the cache.  Unfortunately without a cell signal to find a new cache in the county, we resign ourselves to making another trip to this county in the future to get a cache.

Undaunted, we proceed to the next county and a cache that sounds massively cool - The Dungeon by the Schoolhouse.  Dungeon Cache. I've added the URL if you are a fellow cacher and want to check it out.  if not, here's a quick picture.

We were exciting to search for this cache in a neat place with some history but after 30 minutes of looking in every nook and cranny, scratching our heads and discussing where it could be, we gave up on this one, too.Major bummer that we started the day with two Did Not Find (DNFs).  The upside is that we were in a city and our cell phone worked so we found a quick parking lot cache and our youngest daughter and I made the grab.  It's interesting to watch the sociological interaction of our kids and their competitive nature coming out - the oldest two run around in frantic cycles searching for the cache trying to beat the other one. This naturally leaves the youngest two out of the hunt so we frequently hear "But I haven't found one yet" so sometimes as parents we have to intercede.  ;)  This was one of those times.

Our next cache was pretty close and was at a old grist mill on Wolf Creek. We were excited for this one as it also claims to be where the local Boy Scout troop meets.  We knew we were deep in the sticks of Ohio when we saw the signs to the local "Mud Run" for 4x4 pickup trucks.  :)   This was a quick find for our expert team of cachers and our confidence in our searching skills was restored.  The next cache had the potential for a Geocaching first for us, a "First to Find" which as the name implies means we are the first people to log a find for it.

This cache was in a small town park in Noble county and was on a newly restored howitzer.  Sydney found the cache, I logged the FTF and then the kids asked if they could play on the cool stuff on the playground.  Who can resist slides, merry go rounds, swings and teeter-totters?  I even got in on the swinging and had fun.  After goofing around for a bit we loaded back into the car and were headed for the next exciting cache.

This next cache was in a cemetery and seemed like it'd be close-ish based on looking at the map.  This ended up being one of the most remote caches we've done so far.  We drove on twisty, winding 2 lane roads, down to 1.5 lane roads to eventually gravel roads before finish the remote church on the top of a hill with a great view.  An easy find that our youngest son made after reminding the older kids that they need to "share" the caches.  A unique opportunity was to use real outhouses by the church as it'd been a while since we were near restrooms.
We loaded back in the car and plugged the coordinates for the next cache into the GPS when I noticed that the gas light was on.  Uh-oh.  We were in a remote area of Ohio that is very hilly and low on gas.  We told the GPS to find the closest gas station and were on our way. A few prayers that we would make it there as well as that it would be open were said! Our prayers were heard and answered as we made it to a Marathon with old school pumps with dials for the gas.  My pumping skills are still top notch and I hit $50.00 even with no problem.  :)

The gas crisis behind us, we realized we needed to eat and made a run for the border - Taco Bell to rescue!  We programmed the next cache into the GPS and hit the road.  This cache was placed by a Boy Scout troop and they also asked anyone to find it to log their Scouting rank.  We drove to the cache and the GPS was telling us to go onto private property.  This didn't seem appealing deep in the heart of southern OH so we circled it a few more times before realizing it was along an abandoned railroad bed.  As I am backing up in the all terrain Honda Odyssey I ended up in the ditch with the left front wheel off of the ground and unable to move.  I *wish* I had taken a picture but was more concerned with my stupidity and wanted to get out of the ditch.  I had Julie slide over to the driver's seat while I bounced up and down on the driver's side to get the wheel to touch down and get traction.  Thankfully this worked and we all had a collective sigh of relief and laugh at my expense.  We parked safely and walked down the track and made a quick grab of the cache.

One more planned cache to find so off we went with a goal in mind to crush it.  We arrived at the location which was another old cemetery and searched high and low to no avail. Another 30 minutes of searching and we called it missing and resigned ourselves to a DNF.  It was getting into the early evening and we were in the eastern part of Ohio so wanted to head home.  A stop for a restroom break was in order and as luck would have it, there was a cache across the street.  These things are *everywhere*!  A quick grab and we were able to mark off another county!

We snagged a quick cache at the Zane Grey museum outside of Zanesville just for kicks and grins to bring our day's total to 6 for the day!!!

Julie and I use the Whatsapp program instead of texting and made the executive decision to stop by Ye Olde Mill in Utica for some Velvet Ice Cream (so good!) as a reward for an awesome weekend of Geocaching and fun as a family.

We had a great time and can't wait to do it again and see ore of Ohio and have more adventures.  Amaziningly the tale of the tape with numbers is significant:
Our updated map of Ohio now looks like this: 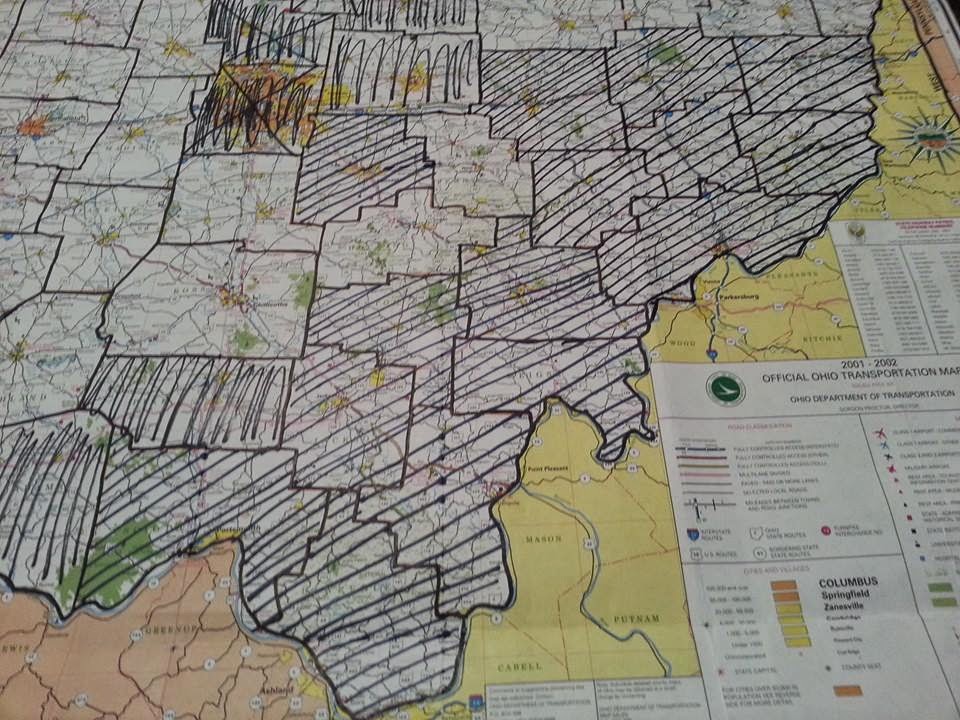 I hope you enjoyed it and can't wait to share more with you.
Posted by Ron Fuller at 4:27 PM